Was this page helpful?

Allowing Code in Constructors Before super()

In JavaScript classes it’s mandatory to call super() before referring to this. TypeScript enforces this as well, though it was a bit too strict in how it ensured this. In TypeScript, it was previously an error to contain any code at the beginning of a constructor if its containing class had any property initializers.

This made it cheap to check that super() gets called before this is referenced, but it ended up rejecting a lot of valid code. TypeScript 4.6 is now much more lenient in that check and permits other code to run before super()., all while still ensuring that super() occurs at the top-level before any references to this.

We’d like to extend our thanks to Joshua Goldberg for patiently working with us to land this change!

This lets us work with objects that can hold different data, but a common field tells us which data those objects have.

This is very common in TypeScript; however, depending on your preferences, you might have wanted to destructure kind and payload in the the example above. Perhaps something like the following:

Previously TypeScript would error on these - once kind and payload were extracted from the same object into variables, they were considered totally independent.

In TypeScript 4.6, this just works!

When destructuring individual properties into a const declaration, or when destructuring a parameter into variables that are never assigned to, TypeScript will check for if the destructured type is a discriminated union. If it is, TypeScript can now narrow the types of variables depending on checks of other variables So in our example, a check on kind narrows the type of payload.

For more information, see the pull request that implemented this analysis.

TypeScript has some interesting challenges due to the fact that it’s built on a structural type system that also provides generics.

In a structural type system, object types are compatible based on the members they have.

Notice that whether or not Source is compatible with Target has to do with whether their properties are assignable. In this case, that’s just prop.

When you introduce generics into this, there are some harder questions to answer. For instance, is a Source<string> assignable to a Target<number> in the following case?

TypeScript has a few heuristics here - if a type appears to be infinitely expanding after encountering a certain depth check, then it considers that the types could be compatible. This is usually enough, but embarrassingly there were some false-negatives that this wouldn’t catch.

A human reader can see that x and y should be incompatible in the above example. While the types are deeply nested, that’s just a consequence of how they were declared. The heuristic was meant to capture cases where deeply-nested types were generated through exploring the types, not from when a developer wrote that type out themselves.

TypeScript 4.6 is now able to distinguish these cases, and correctly errors on the last example. Additionally, because the language is no longer concerned with false-positives from explicitly-written types, TypeScript can conclude that a type is infinitely expanding much earlier, and save a bunch of work in checking for type compatibility. As a result, libraries on DefinitelyTyped like redux-immutable, react-lazylog, and yup saw a 50% reduction in check-time.

You may already have this change because it was cherry-picked into TypeScript 4.5.3, but it is a notable feature of TypeScript 4.6 which you can read up more about here.

This pattern was already supported and allowed TypeScript to understand that the call to record.f(record.v) is valid, but previously the call to processRecord would give poor inference results for val

TypeScript 4.6 improves this so that no type assertions are necessary within the call to processRecord.

For more information, you can read up on the pull request.

A signature can be declared with a rest parameter whose type is a discriminated union of tuples.

In cases where TypeScript infers the type of a function from a signature like this, TypeScript can now narrow parameters that depend on each other.

For more information, see the change on GitHub.

TypeScript’s --target option now supports es2022. This means features like class fields now have a stable output target where they can be preserved. It also means that new built-in functionality like the at() method on Arrays, Object.hasOwn, or the cause option on new Error can be used either with this new --target setting, or with --lib es2022.

This functionality was implemented by Kagami Sascha Rosylight (saschanaz) over several PRs, and we’re grateful for that contribution!

Previously, when compiling code like the following in --jsx react-jsx

That last void 0 argument is unnecessary in this emit mode, and removing it can improve bundle sizes.

Thanks to a pull request from Alexander Tarasyuk, TypeScript 4.6 now drops the void 0 argument.

In JSDoc, you can document parameters using an @param tag.

But what happens when these comments fall out of date? What if we rename x and y to a and b?

Previously TypeScript would only tell you about this when performing type-checking on JavaScript files - when using either the checkJs option, or adding a // @ts-check comment to the top of your file.

You can now get similar information for TypeScript files in your editor! TypeScript now provides suggestions for when parameter names don’t match between your function and its JSDoc comment. 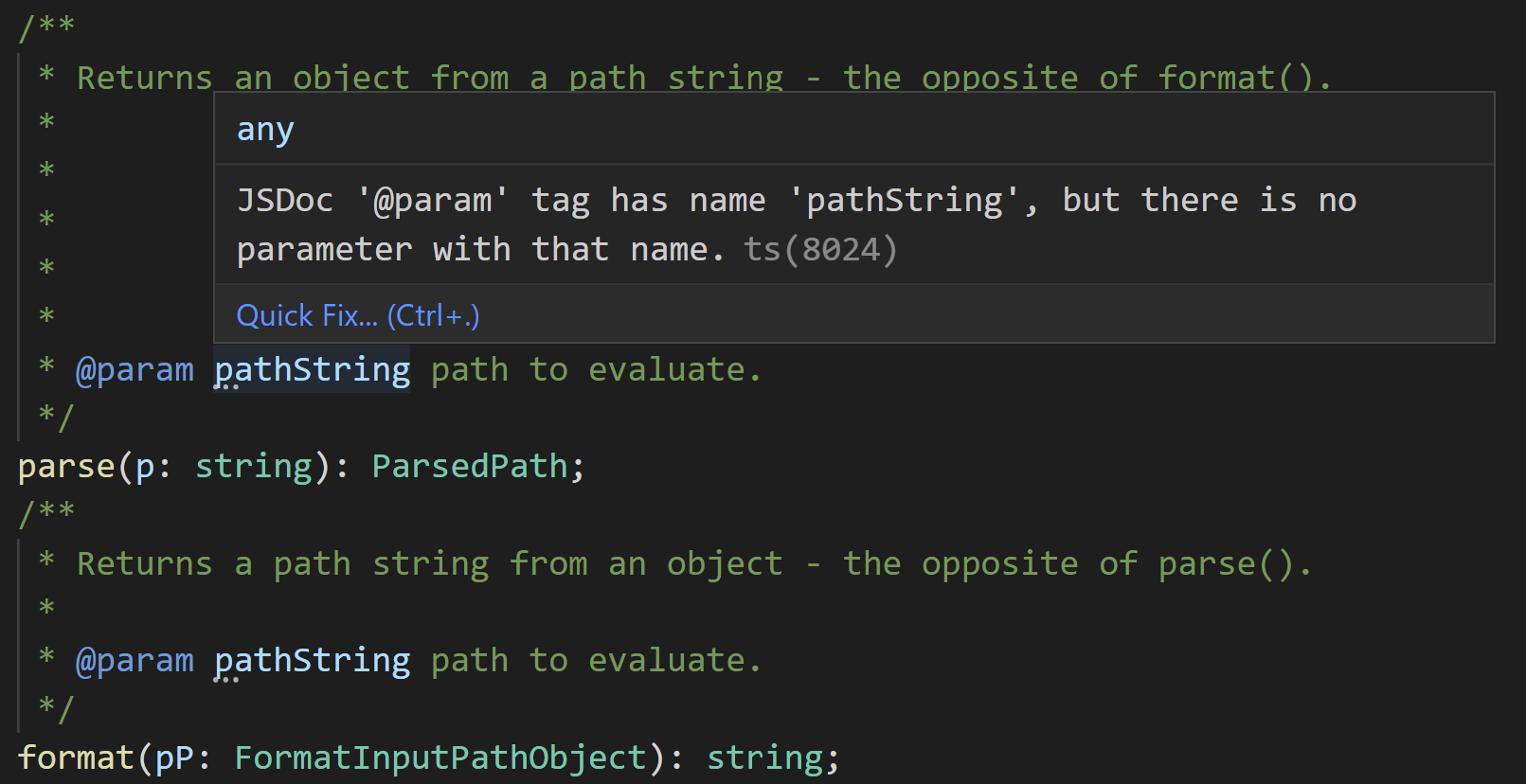 This change was provided courtesy of Alexander Tarasyuk!

As one example, if you have two declarations of a const in the same scope of a JavaScript file, TypeScript will now issue an error on those declarations.

As another example, TypeScript will let you know if a modifier is being incorrectly used.

These errors can be disabled by adding a // @ts-nocheck at the top of your file, but we’re interested in hearing some early feedback about how it works for your JavaScript workflow. You can easily try it out for Visual Studio Code by installing the TypeScript and JavaScript Nightly Extension, and read up more on the first and second pull requests.

Occasionally, teams may encounter types that are computationally expensive to create and compare against other types. TypeScript has a --generateTrace flag to help identify some of those expensive types, or sometimes help diagnose issues in the TypeScript compiler. While the information generated by --generateTrace can be useful (especially with some information added in TypeScript 4.6), it can often be hard to read in existing trace visualizers.

We recently published a tool called @typescript/analyze-trace to get a more digestible view of this information. While we don’t expect everyone to need analyze-trace, we think it can come in handy for any team that is running into build performance issues with TypeScript.

Object rest expressions now drop members that appear to be unspreadable on generic objects. In the following example…

You can explicitly turn these errors off by inserting a // @ts-nocheck comment at the top of your file.

For more information, see the first and second implementing pull requests for these features.

The TypeScript docs are an open source project. Help us improve these pages by sending a Pull Request ❤

Contributors to this page:
DR